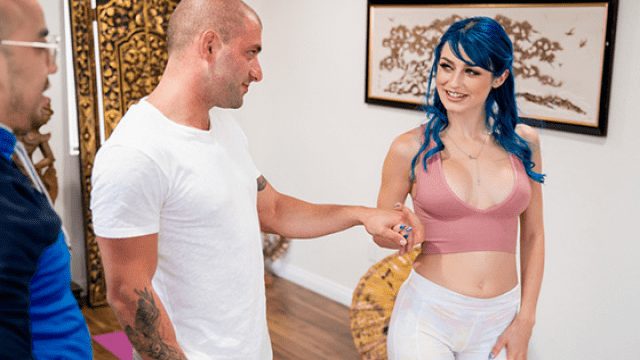 Jason Moody and his friend arrive at a massage parlor. Jason is curious why he’s being gifted a massage. His friend tells him that it’s because Jason needs to get over a recent breakup and relax a little. Jason is saddened as he’s reminded of the breakup, insisting that she was THE ONE, though the friend rolls his eyes and tells him to get over it. Masseuse Jewelz Blu appears, greeting them. The friend grabs Jason and pushes him to the front, and tells her that he’s there for his ‘exclusive package’ massage, exchanging knowing looks and grins with Jewelz while Jason is clearly oblivious. Jason is also polite but shy around Jewelz. Jewelz invites Jason to follow her. Jason is very shy as he showers with Jewelz, who sensually massages him. He is naive about Jewelz’s intentions even as she strokes his cock. After the shower, Jewelz takes Jason into the private room and starts the NURU massage. She is very erotic and sexual but Jason still thinks it’s all innocent and part of a typical massage. Jewelz starts stroking Jason’s cock in a much more obvious way that even Jason can’t shrug off. He’s startled, asking what she’s doing. Again, Jewelz insists that this is a natural part of the massage. Surely he’s heard of happy endings before. Jason is hesitant but tempted… and Jewelz IS very pretty, so…Jewelz is pleased with his compliment and how he’s finally giving in, and coaxes him further until he says yes. She puts his cock in her mouth. Jason’s friend wanted to get him laid…and it looks like his plan worked!