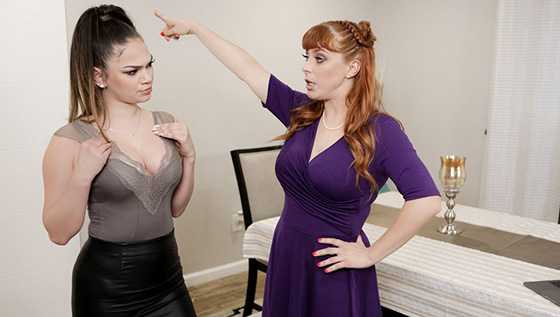 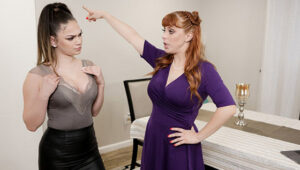 Penny Pax is picking away at her laptop when her teen step-daughter, Athena Faris, enters the room. Athena sweetly asks Penny for help, claiming that she’s really having a hard time getting a part-time summer job. She just can’t seem to get the interviews right. Delighted, Penny agrees to help her out by starting with working on her credentials. But the more questions Penny asks, the more she is mortified by her daughter. No matter what Penny says, Athena responds with something sexual. It only gets worse from there as Penny gets her to try on interview clothes instead since Athena keeps wearing the skimpiest clothes she owns! Penny is dismayed, wondering HOW she can help her daughter succeed in the working world… when she suddenly has an epiphany. She was so caught up in showing Athena what she HERSELF would do in an interview instead of playing up Athena’s strengths. If Athena’s strength is her prowess, then that’s what she should use to win prospective employers over… Penny challenges Athena to put her REAL skills to the test, which leads to a steamy encounter. Athena eagerly eats Penny’s pussy, making her head spin. Penny makes sure to get a taste of Athena, too, wanting to fully prepare her for anything an interviewer has to throw at her. NOW Penny is confident that Athena has what it takes to succeed!