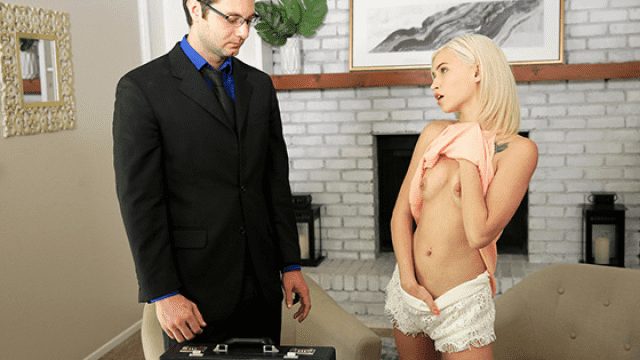 Naughty Kiara Cole has been flirting with trouble for years, and now it has caught up with her. She’s being taken to court for truancy, a charge that may ruin her life. Kiara’s dad, Chris Valiant, is taking it seriously, but unfortunately, Kiara is not. Chris hires Brad Sterling, a well-known lawyer who has a reputation for winning. When Brad arrives, he and Chris talk briefly before Chris leaves Brad alone with Kiara to talk. After Brad has looked the case over, he decides that he can’t win so he won’t take it. Kiara finally decides to take matters seriously and begs Brad not to leave. She tries to entice him with her hot little body, flipping up her shirt to flash her nipples and sliding her hand down into her pants. As soon as Kiara realizes that Brad’s got a hardon from her antics, she knows just what she has to do. Unsnapping Brad’s pants, she pulls his stiffie out and strokes it as she drops to her knees. Leaning forward, she opens her mouth and starts sucking. Brad agrees to take a seat and let Kiara plead her case. She starts by putting his hands on her nice ass, then climbs into his lap and slides herself right down onto his fuck stick for a ride in her bare pussy. Brad is open to Kiara’s continued argument. He gets up so she can kneel on the chair and watch over her shoulder as he enters her from behind. Turning onto her back, Kiara brings her knees up to her shoulders to open herself completely for Brad’s pussy pounding. She encourages him to keep it up until he pulls out and pops his load all over her tits. They’re just enjoying the afterglow when Chris busts Kiara and yells at her for fucking the lawyer.

[JulesJordan] Angela White Sets A BOOBY Trap For Mandingo That Ends In Her ASS 09.10.2018