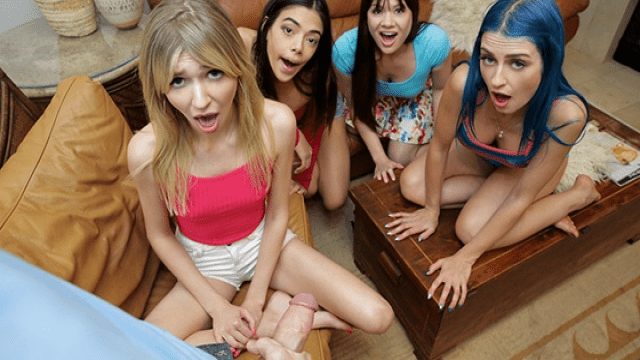 Mackenzie Moss is hanging out with her friends Jewelz Blu, Harmony Wonder, and Alison Rey. The girls are gossiping. The conversation turns to Mackenzie’s stepbrother, Rion King, who is totally a virgin. Mackenzie wants to pop Rion’s cherry. Jewelz encourages Mackenzie to act on her desire, and the other two girls join in on egging her on. Mackenzie calls Rion in, then reaches out to touch his dick. He has an obvious boner, but Rion tries to disengage. Mackenzie escalates the situation by getting all her friends chanting that he should show them his cock. Eventually he agrees and whips his dick out before taking off. The girls are all impressed at how big Rion’s dick is. They want more, so they agree that Mackenzie should call Rion back in and get more than just a show. They confirm that he’s still hard, and then the girls take up a new chant that Mackenzie should suck Rion’s dick. Eventually, Rion gives in and lets his sister wrap her lips around his hardon