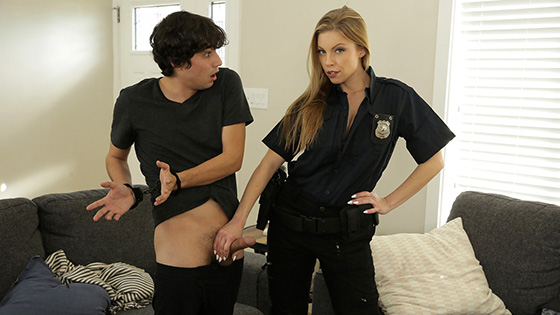 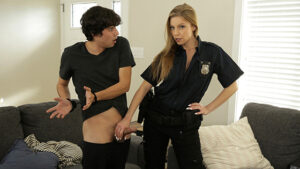 Britney Amber is a hard-nosed cop who doesn’t take shit from anyone, including her stepson, Ricky Spanish. She gets her bigtit bod dressed for work, then tells Ricky to stop jacking off and clean up around the house. Unfortunately for Ricky, he ignores his mom’s directive. When Britney returns home and finds Ricky right where she left him, including his hand on his dick, Britney knows that the only way to turn her stepson around is to empty his balls completely. Good thing this hot police officer knows just how to do that. Whipping out her handcuffs, Britney ties Ricky up. She already knows his dick is hard as she kneels to start sucking him off. Ricky can’t believe his stepmommy has her puffy lips wrapped around his fuck stick He’s even more taken aback when Britney starts peeling off her uniform, popping her jugs out of her bra and peeling off her thong. By the time Britney has pushed Ricky onto the couch and climbed onto his cock to start riding him, though, he figures he’d better see this ride through to the very end. Britney gets on her knees on the couch and tells Ricky to fuck her in doggy. When that doesn’t empty Ricky’s balls, Britney pushes him onto the couch so she can ride his dick. Reverse cowgirl doesn’t work and neither does cowgirl! There’s only one thing left to do: Britney lays down and spreads her legs so Ricky can pound her while watching those titties jiggle. That finally does it; Ricky nuts all over his mama’s stomach and boobs. Now that Ricky has finally blown his load, Britney tells him he can now focus on his homework and cleaning up around the house.

[BangOriginal] Lola Blond Ready To Fuck Her Husband As Soon As He Finishes Work 10.18.2018